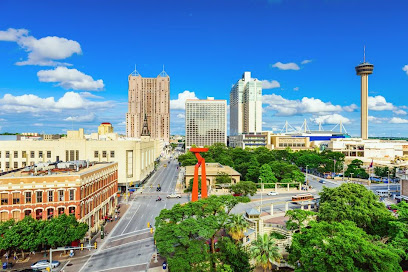 Downtown San Antonio is a thriving business and entertainment hub, with unique bistros and bars lining the famed San Antonio River Walk. Tours of the Alamo, a Spanish mission from the 18th century, recount the site’s importance in the 1836 war for Texas freedom. The Majestic Theatre, which is grandiose in Mediterranean architecture, hosts concerts, and Broadway productions, while the San Antonio Museum of Art houses an international collection spanning decades.

Downtown San Antonio is the primary business district of San Antonio, Texas. It is also the urban hub of Greater San Antonio, a metropolitan area with a population of about 2.5 million people. In addition to Loops 1604 and 410, Downtown San Antonio is surrounded by three Interstate highways: I-35, I-37, and I-10. The three freeways, I-35 to the north and west, I-37 to the east, and I-10 to the south, form a rectangular circuit around the city’s metropolitan core. The rectangular loop has a circumference of nine miles and is known as the “Downtown Loop” or “Central Loop,” which includes both it and Southtown.

The Medical District is located in the northwest corner of Downtown.

The Rivercenter, which is anchored by a Macy’s, an IMAX cinema, an H&M, and formerly Dillard’s, is located in the Central Business District. The five-story Art Deco Dillard’s on Alamo and Commerce streets first opened its doors in 1887 as Joske’s. Joske’s main store had a floor space of 551,000 square feet (51,200 m2) until Dillard’s purchased the Joske’s business in 1987. Dillard’s left the historic building in August 2008 as part of Rivercenter Mall’s redevelopment plan. After St. Joseph Catholic Church declined to relocate, the Rivercenter Mall was erected around it.

Many visitors come to see the Alamo Plaza Historic District, which includes the iconic Alamo. Many of the year’s celebrations, including NIOSA, take place at attractions such as the river walk. A night in Old San Antonio celebrating Fiesta, Cinco de Mayo, and several parades including festivities for their home NBA club, the Spurs, Christmas parades, and much more.

The Alamodome, located on the southeastern side of Downtown, is a 65,000-seat arena that accommodates a variety of events, notably conventions and football games.

While many San Antonio businesses are located in other parts of the city, mainly the Northwest Side and Uptown, there are a few that are located in Downtown San Antonio, including H-E-B, Eye Care Centers of America, Bromley Originate Change, and Kell Muoz Architects.

The next neighborhood in San Antonio, TX: Lackland AFB